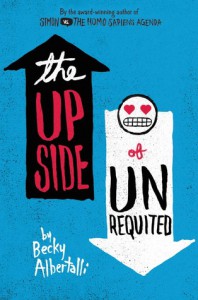 Do you like cliche teenage romance with a ton of LGBT thrown in, almost none of which affects the relations of the heterosexual, boy-crazy female protagonist? Do you like reading about a shy, inexperienced, single protag with low self-esteem who is constantly annoyed that everyone around them won't stop talking about sex and boys - but then proceeds to get herself a boyfriend anyway? Do you want predictability and a lousy love triangle which ends up lasting less than two chapters? A character who challenges the inevitable by actually losing character development as the book goes on? Girls swearing at the top of their voices, getting drunk at parties, and talking about piss? A host of characters where only one of them is actually homophobic at all, just like real life doesn't work?

Then look no further! From the author of Simon vs The Homo Sapiens Agenda, we have a new book full of The Gay, only not quite as stereotypical and slightly less cringy, whilst managing to somehow reference characters from her previous book for reasons that I can only guess at.

I was quite intrigued by this book at first. There's a lot of LGBT issues going on in this book - and it starts when you find out that our protagonist, Molly, has two mums. Yep. That's pretty cool. I've never actually seen that in a YA book before, but maybe I'm just missing some hidden cache of teenage fiction where lesbian mums come together.

Molly has a twin sister called Cassie. Cassie is into girls, and at the beginning of the book, I really liked her. She is always flirting with girls, talking about them with Molly (and her parents) and seemed a really fun character. Really likeable.

There are a few other characters, including a couple of hipster boys which make up the various guys that Molly ends up crushing on. Yeah, Molly isn't into girls, as it turns out. We've got all these LGBT characters, two mums, all that stuff...but never mind, the book is just about whether our boy-crazy Molly finds a boyfriend or not. Kind of a waste, really.

I did like the romance in this book. It was cute, it was quirky, and it's been done before. Nothing special, really. Apparently Molly is a girl with 20+ crushes on various guys but is too shy to instigate anything with them. She's never been in a relationship, never kissed, never...

...yeah, I think I can see where this is going.

Now, this book was going fine until a certain chapter - and that's when Cassie gets a girlfriend of her own called Mina. At this point, her character starts changing. She doesn't tell her own sister that she now has a girlfriend. Molly has to find out from a Facebook update. Seriously.

It doesn't end there, either. Oh no. Don't ask me why, but Cassie starts acting all high-and-mighty, arrogant, talks back to her parents, gets pretty rebellious, gets in a fight with Molly (they're usually on really good terms), starts being really inconsiderate, and IMO becomes a pretty shitty character. She pushes her to date this guy that she's not really into, mainly because the guy is best friends with her own girlfriend.

I've never really experienced seeing my favourite character in a book turn into the character I most dislike. I mean, come on. What the hell?

She started acting like such a drama queen and apparently almost none of the characters have a problem with this at all. Not even our protagonist. Molly gets annoyed with her a bit, a little bit hurt, especially when Cassie starts bringing up things like "maybe I'm being a dickhead here, but this is something you only understand if you have a boyfriend".

Oh yes, Cassie, you are most certainly being a dickhead here. Molly has spent most of the book languishing over her single status and worrying about her own weight because boys don't seem to want to date her and...seriously??

Anyway, what happens? Oh yeah, Molly meets guys and can't work out whether to go for this one or that one. The cute hipster guy or the cute nerd she works with in the store? That's pretty much the second half of the book. It's obvious which way it will go, since she's certainly more comfortable with one of them.

But for god's sake, Cassie constantly trying to pressurise her into dating the other guy...man, it's just cringey.

An interesting thing that happens is that halfway through the book, gay marriage becomes legal. Meaning that her mothers can now get married to each other, so bam, gay wedding! That was a nice touch. The only thing with all of this LGBT stuff is that absolutely everyone seems to be okay with it. No one gives Cassie funny looks for being with her girlfriend. It's never touched upon, ever. You'd think she was dating a guy from the way it goes on.

Oh, except for their homophobic auntie who makes one appearance in the last chapter to show her appreciation, but that's about it. Literally nothing else.

Now, the main storyline here is that Molly is going to all these parties and social occasions with her friends, meeting people there, getting a bit drunk, and everyone around her keeps talking about sex and boys and relationships. Unsurprisingly, she feels a bit out of place. She's a virgin and is painfully aware of that, and quite a bit insecure. She doesn't like all of this sex talk at all and feels really uncomfortable.

At which point I'm thinking, "Great! We could have a character who wants to stay single and doesn't want to get involved in love or sex. Just platonic. It would be a really refreshing change from the same old stereotypical formula. She can stay single and show everyone that she doesn't need a boyfriend to "fit in" with everyone else..."

Oh, boy. What was I thinking? Of course she ends up with a boyfriend. And you know what, as soon as she does, Cassie is all over her again just like she used to be, and start apologising for being a total shitbag throughout the entire book (except not really).

So...now it's not about showing us that she can be single and independent? It's about the importance of her needing to get a boyfriend? You know what, fuck that. It turned out to be trashy predictably romance with a dose of LGBT sprinkled on top. I'm not impressed by the result.

You know what else happens? Two characters, Simon and Abby, make an appearance. They don't actually do anything. They're just there.

...wait, wasn't Simon the protagonist of this author's first book? And his best friend was called...Abby. Okay. So our dear author has decided to reference her other book. That doesn't make a lot of sense. Even J. K. Rowling doesn't go around doing that...

The author's note at the end is about 7 pages long, detailing a list of 50-60 people that she's thanking for helping her make this book possible. Look here, lady, you're not making a movie here. It was mediocre and I'm not reading it again.

Overall, I liked the book. I hated what Cassie turned into, and Molly was a great character. Most of her friends were cool, if painfully generic. But at the end of the day, it just seems like a standard romance with a bit of LGBT thrown in to mix it about. As a result, I can't give it a very high rating.