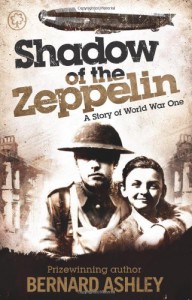 I thoroughly enjoyed this book. The setting is World War I. We settle on two brothers caught up in the conflict - one of whom joins the war effort, the other of whom is too young to join the army and has his own problems at home. In addition, we also focus on one of the German soldiers manning the zeppelins during the Blitz! I really enjoyed that.

Well, what we have here are two brothers, Will and Freddie. Will is old enough to join the army but refuses to join (it is not yet compulsory), and his girlfriend Amy stands by his decision. It isn't until a bomb lands nearby and scars her face that he is spurred to join the war effort.

We also focus on a German bomber called Ernst who, for the most part, isn't much different from the English soldiers. He follows orders, he has a wife waiting for him back home in Germany, and they've just had their first child. He constantly worries that his zeppelin will easily catch fire and go down in flames, much like they do. He is also responsible for the dropping of many bombs during the Blitz.

Freddie doesn't join the war, but he certainly has his fair share of troubles - especially when a bomb lands on his own house and he barely makes it out alive. I can't really go into that without spoiling it however.

There is an attempted rape scene in this book, however it was not described in detail thankfully and I thought it was dealt with appropriately.

I really enjoyed all these characters. Will, Freddie, their family, the rest of the army, Ernst as well...each of them was well-rounded and I would even say that Will is rather relatable. The Germans were not made out to be "evil" or anything like that.

However, I'm not sure all of the content was there. I get that this is a YA book and so the violence and imagery is toned down a bit, but I don't think it shows all the true horrors of war. Will doesn't participate in more than a handful of skirmishes before he's removed from that part altogether (but there's a reason for that). I can't help but think that there could be more to that, but then again I understand that they already had a fair amount of detail going on.

I didn't find any serious flaws with this book, it fit the time period really well. The author really researched this properly - in the author's note at the back of the book, he makes several references to historical events during the time of the Blitz. Even the street names are preserved.

Overall, I liked this book very much. I wouldn't say it's amazing - it tugged at my heartstrings during one particular scene, but not that much. It could be better, really, but I found it to be very well-rounded and well-written in general. 3.5/5.