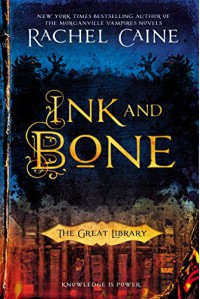 This book was incredible. I'm beginning to take a liking to Rachel Caine's books, as she has a very good writing style and I haven't found much not to like about her books so far.

In this book, the Great Library of Alexandria was never burned to the ground. And that's not all. In this world, knowledge is what controls everything. The Library itself controls people's lives: owning books is illegal, as is selling originals to others, and what can be read by people is strictly controlled.

In that way it's a kind of dystopian future (for example, some countries have been completely destroyed by the Library to protect its knowledge, and there's a war going on between England and Wales which feels surprisingly realistic). I can't really try and explain it all, but you'll have to read it for yourself. It paints quite a vivid picture.

Our protagonist is Jess who is actually from a family or black market book smugglers. His family sends him to work at the Library as a scholar and it goes from there really.

Parts of this book actually made me think of Harry Potter. Hell, he meets a bunch of other students on the train, there's one character who is very Malfoy-ish, there's a girl who's really really smart and knows the answer to every question...Yeeep.

At first, it seems quite normal as Jess and his students are taught the ropes as they compete for the six slots available for a Library scholarship. He also has to hide his own identity, of course, and bond with the other students.

Oh, and about halfway through the book people start dying. It starts heading that way. I'll even go so far as to say that there are too many character deaths for my liking. It makes sense, of course, but...there's a death near the book which I really didn't like.

I really enjoyed this book. There's a great sense of mystery, intrigue, politics, fighting, schoolteaching and practically everyone has developed by the end of this book. There is romance, too, but I think the book could have done without it. I'm not complaining too much about that though.

Plus, it's the first in a series. I wouldn't mind reading the sequel if I see it. All in all, I greatly enjoyed this book and looking forward to more of this author's work.

Oh, and there's a canon gay relationship. Just in case you like that sort of thing.

It's strange, actually, how there are so many books with gay relationships in them now. Sometimes they're just thrown in there for no reason whatsoever (compared to books I read 10 years ago from school!). But at least in this book, it did make sense, which I liked.