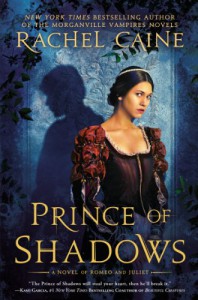 Imagine Romeo and Juliet being written using language that is understandable (as in, not Shakespearean, so that it's easier to read) without losing the classic edge that makes it Shakespeare.

Imagine that it's being written slightly different, expanding Rosalind's character and giving us a greater insight into the lives of the Capulets and the Montagues.

Imagine that Mercutio's character is explored in much greater detail, including themes of homosexuality.

And finally, imagine that the main character is now Benvolio.

And that he's the Robin Hood of Shakespeare.

This book is what you get if you put all those things together. I was quite impressed with how this author managed it. It incorporates all of the crucial themes from the original play, but also develops all of the otherwise overlooked parts of Romeo and Juliet.

For example, remember Rosalind? Romeo's first "love" before he meets Juliet? In the original play, she's given virtually no character at all - she's just there as a stepping stone to Juliet.

In this book...she's one of the main characters and has a distinct chemistry with Benvolio. She has conflicting responsibilities, an abusive brother, and is a strong female character in her own right. I really enjoyed how she was written.

Here's the extra bits you now get in this book:

- Main character is Benvolio and he's Robin Hood. Literally. He steals from the rich and gives to the poor. He's the "Prince of Shadows" that the book is named after! That wasn't in the play...

- Romeo is a side character for about half the freaking book. Juliet has barely any lines, but then again Benvolio never really interacts with her.

- Benvolio has the hots for Rosalind. Bet you didn't see that coming.

- Mercutio is now gay and this has real consequences.

- Tybalt is abusive, a woman-beater and a rapist. Actually, many of the men in this book are also rapists - to servant girls mostly. The sexual assault is not explicit, mind you. But it is mentioned.

- Remember how many people die in the original play? Triple that number. This book just ups the ante.

There's a twist near the end, quite cleverly done. Even though it does stick to the play - there's quite a nice surprise which wraps everything together.

Several times in the book, the author actually quotes directly from the play. Such as certain lines spoken by Romeo and Mercutio...and this here I felt was done a bit awkwardly. The author quotes the Shakespearean lines word for word and it doesn't really fit in with the rest of the book. I can see why she would put it in though.

The amount of characters who die is also ridiculous (way more than the original play). As is the ending. I mean, sure, I guess it makes sense in a way?...But everyone just decides "Oh, it's fine, let's go home now" is a bit much.

It's very enjoyable for anyone who's read Romeo and Juliet.

As an added bonus, if you're one of those who was like "Romeo and Juliet wasn't real love! They just had an infatuation!" (which I'm not critciising, btw, it's quite a valid opinion) - then you're in for a treat near the end of the book. It's quite interesting like that.