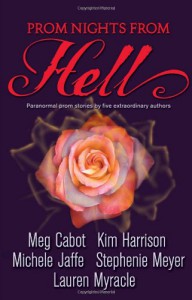 I found this an interesting read. Prom Nights From Hell is actually a collection of shorts stories, each written by a different author. Basically, horror, supernatural, high school stuff, vampires and demons, that kind of stuff.

Yes, I am aware that Stephanie Meyer is one of the authors on this list. So what. I've actually never read Twilight or a single book by her so this was interesting for me. I've written a separate review for each story.

The Exterminator's Daughter by Meg Cabot

This felt like a Buffy the Vampire Slayer fanfic. Mary is a vampire hunter, and her best friend has fallen into the hypnotic clutches of a vampire. A vampire who also happens to be Dracula's son. Um yes, you read that right: this teenage girl is a vampire hunter who has to take down Dracula's son. It's really silly. But I thought it pretty funny and it's not supposed to be serious. A bit of romance along the way too and it was rather enjoyable.

The Corsage by Lauren Myracle

Ever heard of The Monkey's Paw? Yeah, it's in a similar vein: be careful what you wish for. Unlike the other stories, this one was rather serious and had consequences happen and a bit of tragedy. Still...I didn't feel like it was done very well. It kinda ended a bit awkwardly, too. I just ended up feeling sorry for the character which did die because he meant well.

Madison Avery And The Dim Reaper by Kim Harrison

Oh, I really liked this one!! Madison is at prom, being ditched by her date, and meets the boy of her dreams who happens to be a GRIM REAPER who promptly kills her. And she dies. And then...it's a bit complicated to explain, but there are Black Reapers and White Reapers as well as Grim Reapers, and they have to save her from being annihilated. Oh, and she gains some magical powers or something...and gets a guardian angel. I liked it, it had a great sense of adventure. My only problem was that it was a short story so it was rather open-ended but otherwise I liked the atmosphere.

Kiss And Tell by Michelle Jaffe

This story begins with the main character dying. Then it goes back in time. Actually, this story is quite unique, though a little bit weird. The main character has superpowers. I don't freaking know how or why. Neither does she because she can't remember the last 10 years or some shit. But she has to use her powers to save this little girl (a girl who won't stop kissing as many boys as possible! see what I mean? It's so weird) who is apparently a prophet...or something...which is never confirmed. She apologises everytime she knocks out a bad guy. Lots of action and I really enjoyed it!! Felt a bit awkward sometimes but the protagonist was written pretty well.

Hell On Earth by Stephanie Meyer

Oho, I'm reading my first Stephanie Meyer novel!!...and it's not half bad. Basically, unpleasant things are happening at prom - not dead people or anything, just jealousy and dates cheating on other dates, people getting into fights, LOTS of drama. Yup. Turns out that a couple of demons are mixing things up to cause as much misery as possible because they benefit from that. I found it sketchy at first but I really enjoyed how this one ended. Maybe because I'm a sucked for the angel x demon pairing. But yeah it felt a little different.

And that's that. I didn't really dislike any of the stories, they were all pretty great and good fun to read. If you like vampires or demons, a supernatural atmosphere, possible female protagonists kicking ass and a generous dose of comedy then I'm sure this would be enjoyable.