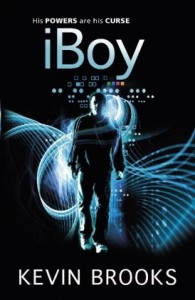 (More details below, but the plot of this book does revolve around a rape of one of the main characters. It's not explicit, thankfully, dealing mostly with the aftermath but it is quite evocative.)

When I first saw the premise of this book, I thought it was crazy. Tom is a teenager who was hit on the head by an iPhone. The iPhone hit him from 30 floors up, cracked his skull, and bits of the iPhone were embedded in his brain. He was in a coma for about a fortnight and the surgeons couldn't remove all the pieces of the phone.

The remaining fragments of the iPhone fused with his brain and turned him into a walking iPhone. As in...he can access all the information  by himself. Take pictures. Save them. Use the internet. Anonymously, even. Just by WILLING HIMSELF to do it.

Does that sound absurd? Does it? Because it does to me. He's using his brain as a freaking iPhone? He can just google anything by THINKING it?

That sounds like one of the most amazing things I've ever heard.

Yup, it is in no ways realistic. But wow. What an idea for a book! Definitely a superhero-kind of book.

Now, um...the actual plot of the book. Which is actually very serious and not as funny as a guy who acquired superpowers because he has a phone in his brain...

One of his best friends got gang-raped in her flat, some real nasty stuff. Because this is a Kevin Bowler book, there are gangs in this story. Like lots of them wearing hoods and stuff, not very pleasant people.

So our protagonist decides to use his new-found powers to take revenge, or at least bring them to justice. He can send anonymous phone calls and texts to the police just by THINKING it, he has access to the entire internet, he spends hours at night just staying awake mentally browsing everything and watching all the horrible stuff that goes on online, trying to stop it...

I mean it really does sound incredible.

Oh, by the way - he can take it one step further by electrocuting people with his fingertips. Seriously. Tom can also use the iPhone's enhanced power to zap people!

He also has a force field. Which he can turn on and off at will.

Unfortunately, he only has this power if he's got a decent reception. If he's got no wireless signal, he's just a normal kid. Can you believe this?

The rape in this book was uncomfortable for me. It wasn't even explicit or descriptive - but Tom talks to the victim at length, you see how people treat her, and it's quite sickening. After reading a few chapters of that I wanted to chop off my own genitals. Jesus. I don't have any experience of sexual assault but it did feel realistically written from her point of view.

Was the superpowered-iPhone-boy absolutely ridiculous? Yes. Does it make the book bad? No. I LOVED it. It really hooked me, seriously. I ended up reading it one day. Hence the high rating.

The ending was satisfactory to me too and it was a great book overall. Just the iPhone superpower thing. So silly, lol.